A Dog’s Love and Companionship Heals

A Dog’s Love and Companionship Heals 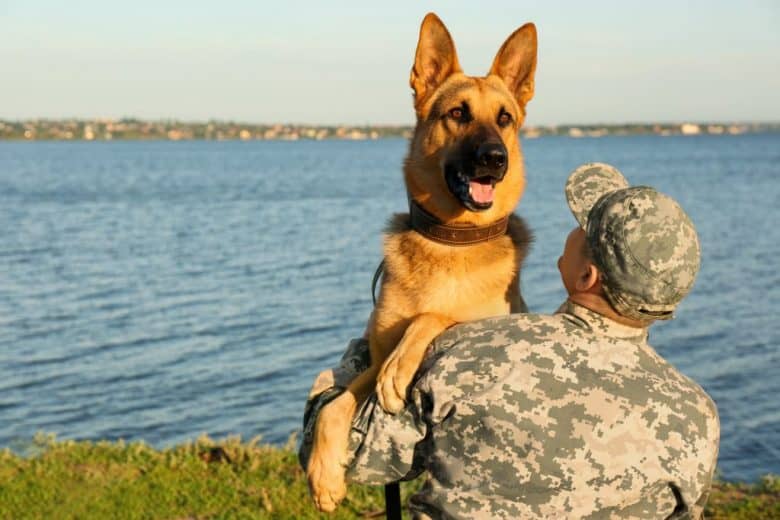 I see a lot of “art house” films – mostly independent, many documentaries, many foreign.  “Triumph over adversity on behalf of a noble cause” is my favorite genre.

Two days ago I saw To Be of Service, a poignant documentary about U.S. military veterans assigned a service dog after treatment with medications and/or therapy failed to provide adequate relief from their post-traumatic stress disorder.  (500,000 veterans in the U.S. currently suffer from PTSD; 22 of them suicide each day, 8,000/year.)

The stories are raw and real; the love between dog and soldier palpable and life-saving. The majority of the dozen veterans interviewed said without hesitancy they would return to deployment if they could. The close bonding among their “battle buddies,” the deepest certainty that their fellow soldiers would lay down their lives for them, as they would in return, was a sense of connection and trust deeper than anything else they had ever known.

And the deep bonding and unconditional love they experienced with their service dogs was the closest they had ever come to that again. The constant companionship, the responsiveness to hugs and affection, and the deep certainty that their dogs were there to protect them and restore a sense of safety in the world, that their dogs were to-the-death loyal and would never leave them behind, brought them back to the selves they knew themselves to be.

[Important insights about the importance of unconditional presence, acceptance, and connection I’ll incorporate into the Bouncing Back, Bouncing Forward: Resilience and Post-Traumatic Growth retreat at Spirit Rock Meditation Center December 14-15, 2019.]

The professional experts interviewed verified that such compasionship helped reduce the horrific symptoms of PTSD among 82% of the veterans who lived with service dogs, and reduced the reliance on medications among 40% of them.  One of the most important benefits of living with a service dog was a healing of the sense of “moral injury.”

Besides dealing with incessant nightmares (and the dogs would sleep on the chest of their owner to help them get through the night) and the overpowering fear of being exposed in public places (and the dogs would always watch their owner’s back as well as walk side by side) and sudden attacks of agitation and nervousness (and the dogs would cuddle close to release the oxytocin, evoking a neurochemical sense of safety and trust), many of the veterans interviewed had witnessed, cleaned up after, or god forbid committed atrocities; experiencing intense shame, remorse, guilt, and a crippling split in the psyche/soul between the values a soldier believed in and who they knew themselves to be and the atrocities they witnessed that separated them from those values, from a sense of being human.

And the service dog’s unconditional acceptance, non-judgmental devotion, and constant attuned presence helped the veterans come to a sense of acceptance and valuing of themselves as normal, decent human beings again.

There are so many examples of the love of animals helping humans heal from post-traumatic stress. For more information about this particular program, see To Be of Service.