Frederick Douglass and His Descendants on the Fourth of July

Frederick Douglass and His Descendants on the Fourth of July 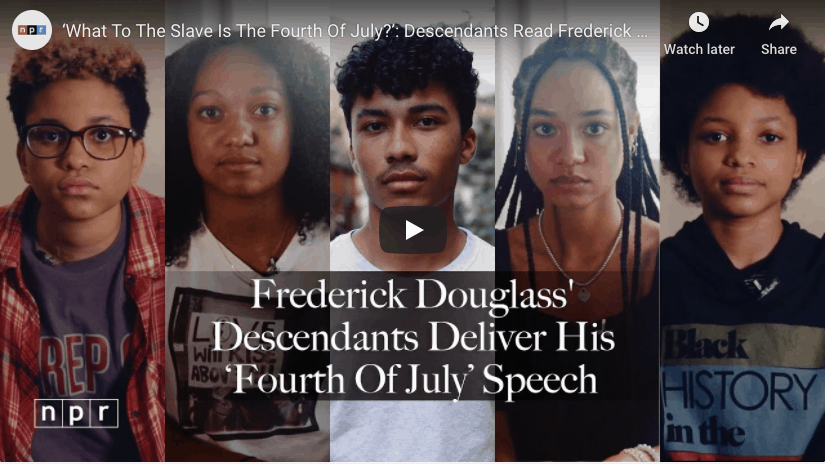 Celebrating the 4th of July as America’s Independence Day was a bit of a mixed bag this year, in the midst of sheltering in place because of the coronavirus pandemic and the recognition across the country that many of the lofty ideals of the original July 4, 1776 Declaration of Independence from British rule have yet to be achieved for many Americans.

We hold these truths to be self-evident, that all men are created equal, that they are endowed by their Creator with certain unalienable Rights, that among these are Life, Liberty and the pursuit of Happiness.–That whenever any Form of Government becomes destructive of these ends, it is the Right of the People to alter or to abolish it, and to institute new Government, laying its foundation on such principles and organizing its powers in such form, as to them shall seem most likely to effect their Safety and Happiness…. When a long train of abuses and usurpations, pursuing invariably the same Object evinces a design to reduce them under absolute Despotism, it is their right, it is their duty, to throw off such Government, and to provide new Guards for their future security.

We tend to forget the power of those intentions amidst the innocence of our traditional picnics and fireworks. This year, many protests, on the streets and in the media, reminded us that some people are quite tired of suffering abuses and usurpations of their unalienable rights of life, liberty, and the pursuit of happiness.

Frederick Douglass was a brilliant orator and abolitionist who did not forget. His “What to the Slave is the Fourth of July” speech, delivered to a group of abolitionists on July 5, 1852, when slavery was still legal and an intractable institution in the United States, spoke eloquently, searingly, to the realities of black American’s experience. [Read the transcript of his speech here.]

If I had known of the link the day it was posted, I would have posted it, too.  May it not be another 170 years, or even 170 minutes, before we extend the ideals of our independence to all of us, for real.