Heroes in Our Own Lives

Heroes in Our Own Lives 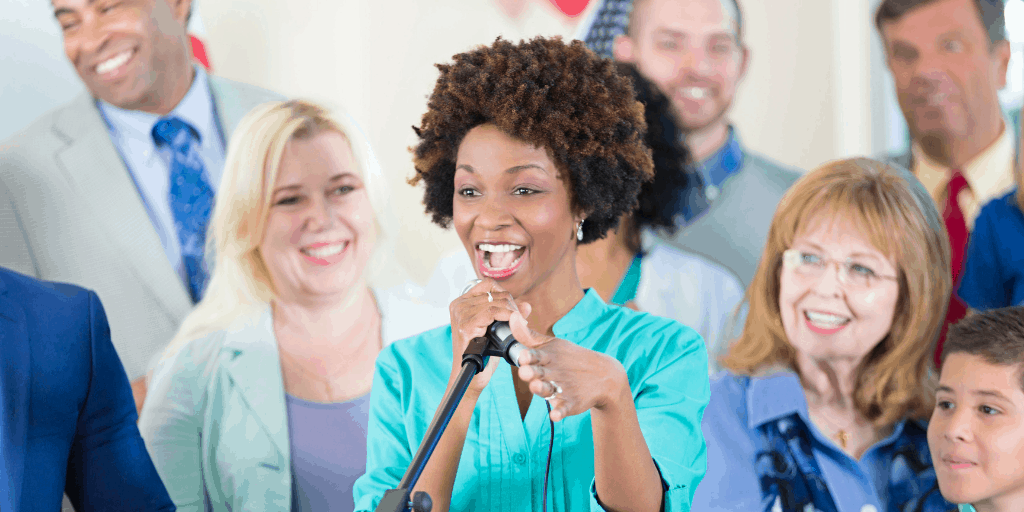 My friend Kathryn was so proud to be a public defender in the San Francisco courts before a debilitating illness made that work impossible to continue. Kathryn continued, volunteering for the Institute for Health and Healing, calling dementia patients to remind them of important doctor’s appointments. Campaigning for the state legislature to allow cancer patients to use a pre-treatment photo when renewing their driver’s licenses. Sending lunch for all of the staff at her cousin Gerard’s surgical critical care unit at a medical center in Brooklyn as the first wave of the pandemic was overwhelming everyone. Kathryn knows how to Show Up for the People Who Are Showing Up.

Last week, Kathryn forwarded me a post-election article from KQED, our local PBS station, to celebrate our 7th “friendversary” celebrating the day we met in a daylong I was teaching at Spirit Rock Meditation Center.  I’m passing it through directly here.  It might seem a bit “in your face,” but perhaps facing the hard post-election work we still need to do to repair and re-build a just and humane society is how we’ll “stay woke” and become heroes to other people, in whatever small ways that make the big differences.

[Not vetted or endorsed, but offered as good information for getting into “good trouble,” as John Lewis would say.]

The Election Is Over – How You Can Keep Doing the Work

Last week, we cast our ballots and proudly donned our “I Voted” stickers. We gnawed our fingernails and ate too much ice cream as we awaited the slowest election tally in recent history.

Then, on Saturday, Joe Biden was declared the president-elect. Celebrations broke out in the streets across the country. YG’s “FDT” played out of car stereos. Horns honked. Rainbow flags waved. Americans breathed out sighs of relief that an impeached president who ordered the teargassing of peaceful protesters, separated immigrant children from parents, rolled back transgender rights and purposely downplayed the COVID-19 pandemic was voted out of office.

(Of course, the Trump administration is currently attempting to contest election results in court with no success so far. Attorney General William Barr has authorized the Justice Department to investigate Trump’s unsubstantiated claims of voting irregularities, prompting the head of the election crimes unit to resign in protest.)

As many rejoiced at the prospect of returning to “normalcy” under a Biden presidency in 2021, others pointed out that many of America’s woes are not uniquely Trumpian problems. Immigrant detention centers and deportations, mass incarceration, systemic racism, homelessness, transphobia and drastic income inequality are bipartisan issues that have been going on for decades, and they aren’t going to vanish under a new president. So if election season and this summer’s protests filled you with energy to do something, the fight’s not over.

Here are organizations accepting volunteers or donations that are doing the groundwork in the Bay Area and beyond:

If you’re worried about a potential coup…

The group Hold the Line created a guide to prep people for a contested election, and now that the Trump administration is attempting to invalidate results, they’re holding weekly meetings for citizens who want to protect the integrity of the democratic process.

Another national organization, Seed the Vote, is continuing its election protection work in battleground states by partnering with local, grassroots social justice groups in Arizona, Pennsylvania and Florida.

If you’re concerned about policing and mass incarceration …

The Anti Police-Terror Project is a Black-led, multi-cultural activist coalition. Most recently, it led an organizing campaign for Oakland City Council to divest funds from the police department in its latest budget cycle. Members of the group also founded Mental Health First, which is a program providing a non-police response to mental health crises, substance use and domestic violence in Oakland and Sacramento. APTP holds an open online meeting every month.

Critical Resistance does policy work and direct actions with the mission of prison abolition. It has chapters in Oakland, Portland, Los Angeles and New York City.

The Ella Baker Center for Human Rights advocates for local, state and national policies that divest from policing and prisons and invest in community services.

CURYJ is a youth-led restorative justice organization, and its many projects include advocacy around specific policies as well as hands-on work like a community garden.

Legal Services for Prisoners with Children provides legal help and policy work, with a focus on women impacted by the prison system. 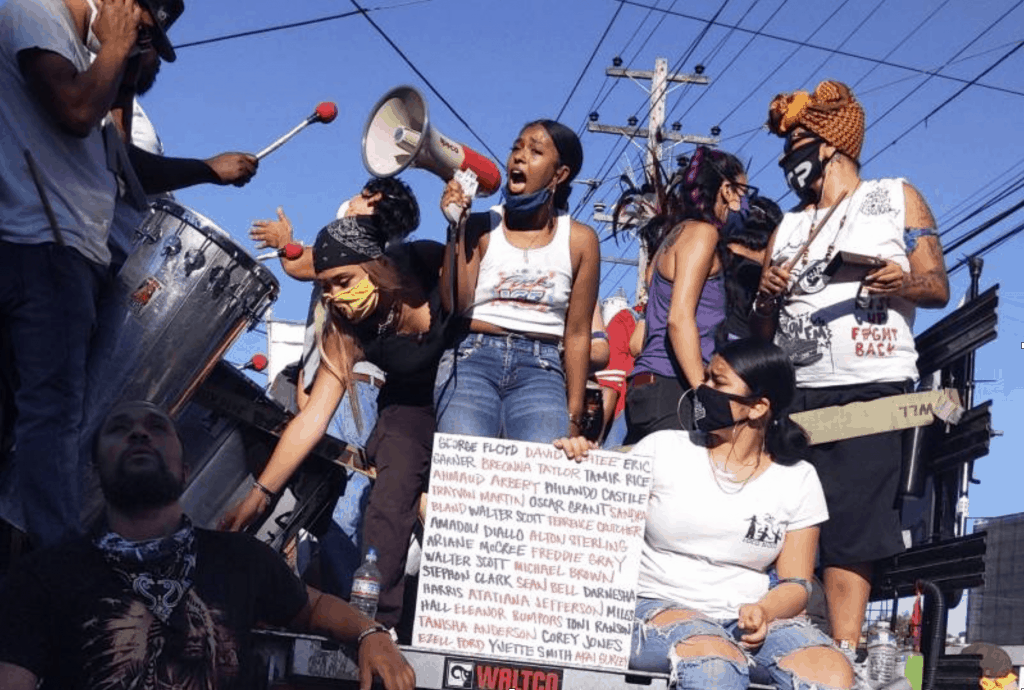 Simone Jacques (with bullhorn), organizer of a youth-led protest against police violence, speaks during a march from Mission High School to San Francisco’s Hall of Justice on June 3, 2020. (Anna Vignet/KQED)

If you want to help our unsheltered neighbors…

People’s Breakfast Oakland is a mutual aid collective inspired by the philosophies of the Black Panthers. This Black socialist org is focused on improving the material living conditions of unhoused people: during COVID-19, they’ve served meals to the residents of West Oakland’s tent encampments three times a week and handed out clothing, gear and hygienic supplies. They also bailed out Black protesters arrested during the George Floyd uprisings. Currently, they’re seeking donations for a tent drive.

Based in San Francisco, Coalition on Homelessness is a policy-driven organization that lobbies state and local elected officials. During the pandemic, they’ve been running a campaign to house unsheltered people in hotel rooms, provide COVID-19 testing and stop encampment sweeps that destroy unhoused people’s belongings.

The Village Oakland is a mutual aid group led by unhoused women. One of its key focuses is direct action: they regularly protest to stop evictions, build tiny homes for unsheltered people and, most recently, they protested outside of councilmembers’ houses to attempt to stop the city’s controversial Encampment Management Plan, which has been decried by advocates.

Larkin Street Youth Services works to get young people off the streets and into stable housing and employment. They accept volunteers to help distribute supplies and spread the word about their campaigns.

Homies Empowerment in Oakland operates a free “store” with food and toiletries for anyone who needs them. It accepts donations.

If you want to stand up for trans rights…

The Transgender Gender-Variant & Intersex Justice Project is a network of trans and gender non-conforming people inside and outside of prisons. They help formerly incarcerated people transition to life on the outside by helping with housing and legal services.

If you want to support refugees, asylum-seekers and immigrants…

Raices Texas offers free and low-cost legal help to people in immigration detention, including children forced to represent themselves in court.

If you want to be an ally for racial justice…

Showing Up for Racial Justice (SURJ) seeks to mobilize white people to join a multi-racial coalition to fight systemic racism. Its members phone bank, attend rallies and write to elected officials. In the next online meeting on Nov. 12 they’ll discuss how they can “ensure that white folks who were activated against Trump don’t fall silent and complacent under a Biden administration.” SURJ has dozens of chapters across the U.S., including several in the Bay Area.

You Might Want to Forget 2020; This Short Film Reminds You Why You Shouldn’t