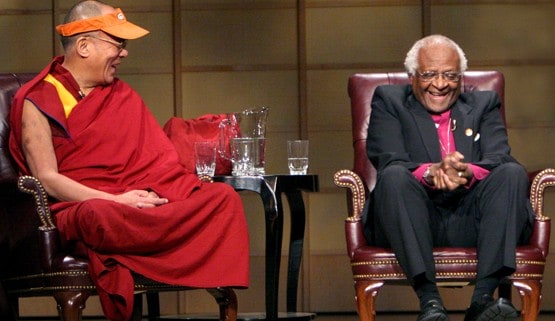 Humility in the face of hidden heroes – Terry Patten

As you read this, I will be re-emerging from viewing 33 films in 10 days of the 2021 Mill Valley Film Festival, 10 in-theater (proof of vaccination and masks required), 23 streamed online.

“Triumph over adversity on behalf of a noble cause” has long been my favorite film genre, and what I learned about resilience from these hidden heroes from around the world was truthfully, appropriately, very humbling to my white, middle-class, Euro-centric paradigm.

Resmaa Menakem already taught us in My Grandmother’s Hands that surviving and thriving for people marginalized, oppressed, discriminated against, rests solidly on the support of belonging in community.

As in the film Lingui (The Sacred Bonds) about women joining together to fight for the right to a safe abortion in the ultra-conservative Muslim community in Chad.

As in the film Mission: Joy, a week-long conversation between Archbishop Desmond Tutu and HH the Dalai Lama, recounting how compassion and community (Ubuntu: humanity for others, “I am what I am because of who we all are) are both essential to survive apartheid and initiate truth and reconciliation in a highly segregated country.

As in the film The New Environmentalists, Indigenous people throughout the Americas in community with each other, in communion with and stewardship of the earth to protect their natural resources and their cultural traditions from corporate colonialism and habitat destruction.

Certainly another p-word, perseverance is foundational to resilience.  Fall down seven times, get up eight. (Japanese proverb)  Falldowngetup – all one word from Naomi Newman

No spoiler here if you watched the worldwide news coverage as this was happening in June 2018. 12 boys and their soccer coach trapped by early monsoon rains 2.5 miles within a limestone cave in Thailand.  It took rescue workers 8 days to even find them, another week to figure out the only option – an Australian anesthesiologist taught the divers to anesthetize each boy and float them out one by one, unconscious, face down, hands and feet tied to prevent thrashing. all 12 boys and their soccer coach carried like human cargo, through 2.5 miles of cave filled with the monsoon rains; the individual divers had to keep administering the anesthesia throughout the trip out. All 12 boys and coach lived because of a strategy that had never been done before, anywhere, ever.

The film Mission: Joy, the week-long conversation between Archbishop Desmond Tutu and HH the Dalai Lama focused mostly on the deep, unshakeable joy in the face of starvation, torture, exile, that comes from decades of spiritual practice and uncompromising service to others.  The buoyant spirits reminded me of the words of the poet Jack Gilbert in “A Brief for the Defense”:

We must risk delight.

We can do without pleasure,
but not delight. Not enjoyment.

We must have the stubbornness

to accept our gladness

in the ruthless furnace of this world.

That’s the joy that Leonard Bernstein spoke of in the film Bernstein’s Wall. Conducting the final movement of Beethoven’s 9th symphony, (the Ode to Joy choral movement) at a concert celebrating the fall of the Berlin Wall in 1989 that had cut off West Berlin from East Berlin and the rest of Germany for 28 years, Bernstein said, “Life is about serenity…and triumphant joy.

May you find the community and the joy that allows you to pivot and persevere in whatever difficulties and even disasters you’re facing now.

What We See…and What We Don’t See

Attitudes of Gratitude with Chronic Pain