In This Place – Another Timely Offering from Amanda Gorman

In This Place – Another Timely Offering from Amanda Gorman 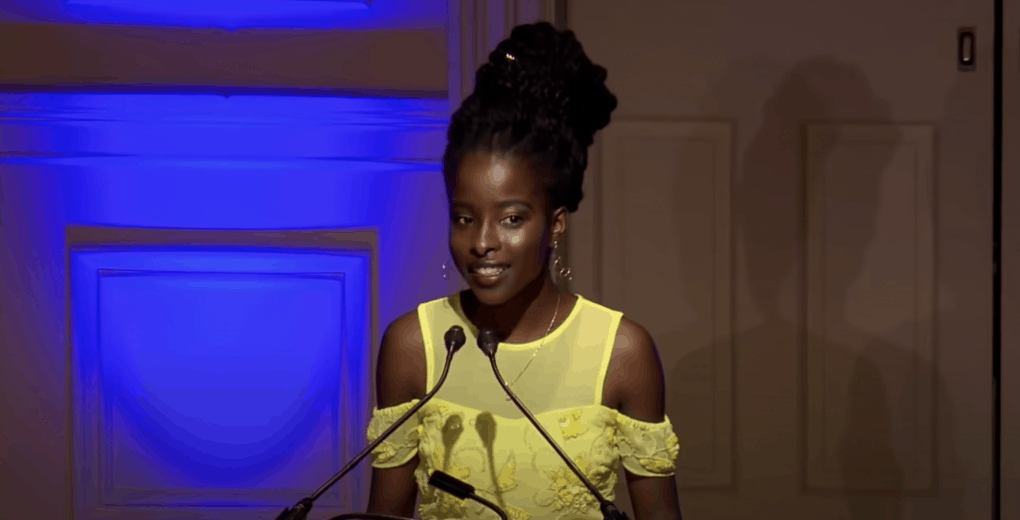 This poem by our Inaugural poet Amanda Gorman showed up in my inbox from Larry Robinson at the very moment I was creating the post Poetry Trumps Politics. For the timing and the truth of it, I’m delighted to pass it on to you.

In This Place
(An American Lyric)

There’s a poem in this place—
in the footfalls in the halls
in the quiet beat of the seats.
It is here, at the curtain of day,
where America writes a lyric
you must whisper to say.

There’s a poem in this place—
in the heavy grace,
the lined face of this noble building,
collections burned and reborn twice.

There’s a poem in Boston’s Copley Square
where protest chants
tear through the air
like sheets of rain,
where love of the many
swallows hatred of the few.

There’s a poem in Charlottesville
where tiki torches string a ring of flame
tight round the wrist of night
where men so white they gleam blue—
seem like statues
where men heap that long wax burning
ever higher
where Heather Heyer
blooms forever in a meadow of resistance.

There’s a poem in the great sleeping giant
of Lake Michigan, defiantly raising
its big blue head to Milwaukee and Chicago—
a poem begun long ago, blazed into frozen soil,
strutting upward and aglow.

There’s a poem in Florida, in East Texas
where streets swell into a nexus
of rivers, cows afloat like mottled buoys in the brown,
where courage is now so common
that 23-year-old Jesus Contreras rescues people from floodwaters.

There’s a poem in Los Angeles
yawning wide as the Pacific tide
where a single mother swelters
in a windowless classroom, teaching
black and brown students in Watts
to spell out their thoughts
so her daughter might write
this poem for you.

There’s a lyric in California
where thousands of students march for blocks,
undocumented and unafraid;
where my friend Rosa finds the power to blossom
in deadlock, her spirit the bedrock of her community.
She knows hope is like a stubborn
ship gripping a dock,
a truth: that you can’t stop a dreamer
or knock down a dream.

How could this not be her city
su nación
our country
our America,
our American lyric to write—
a poem by the people, the poor,
the Protestant, the Muslim, the Jew,
the native, the immigrant,
the black, the brown, the blind, the brave,
the undocumented and undeterred,
the woman, the man, the nonbinary,
the white, the trans,
the ally to all of the above
and more?

Tyrants fear the poet.
Now that we know it
we can’t blow it.
We owe it
to show it
not slow it
although it
hurts to sew it
when the world
skirts below it.
Hope—
we must bestow it
like a wick in the poet
so it can grow, lit,
bringing with it
stories to rewrite—
the story of a Texas city depleted but not defeated
a history written that need not be repeated
a nation composed but not yet completed.
There’s a poem in this place—
a poem in America
a poet in every American
who rewrites this nation, who tells
a story worthy of being told on this minnow of an earth
to breathe hope into a palimpsest of time—
a poet in every American
who sees that our poem penned
doesn’t mean our poem’s end.

There’s a place where this poem dwells—
it is here, it is now, in the yellow song of dawn’s bell
where we write an American lyric
we are just beginning to tell.

(Amanda Gorman is America’s first Youth Poet Laureate. This poem was written for the inaugural reading of Poet Laureate Tracy K. Smith at the Library of Congress.)

A Year into the Pandemic – No Safe Distance from Sorrow