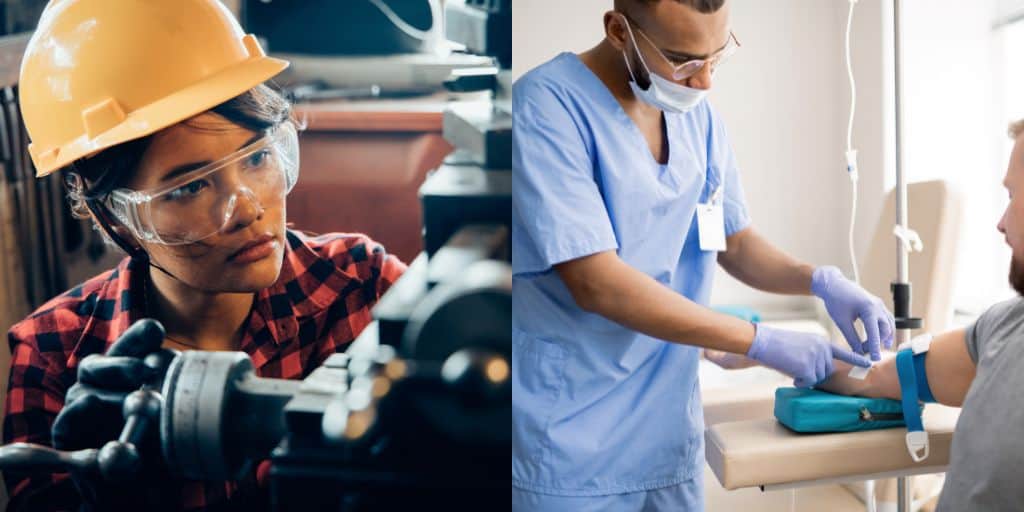 Labor Day was a holiday celebrated in my family as an actual day to remember and respect the legacy of hard work that had allowed my immigrant grandparents to gain a toehold in the American dream. My Irish grandfather digging sewer ditches for the city of Chicago. My Polish grandparents farming the rocky soil in central Minnesota. Their back-breaking labor allowed my parents to become an insurance salesman and a fabric store clerk. Their long hours allowed me to go to college and enter a profession.

Labor Day has commemorated the struggles of working class people to gain fair wages, stable employment, the right to organize in unions, and to be treated with dignity and respect for their hard work that contributed to the nation’s prosperity for the last 125 years.

Nowadays Labor Day is often celebrated only as the last holiday of the summer before the school year begins. But being recognized for the contribution our work makes to the well-being of others is one of the most powerful contributors to our own resilience and well-being.

Recognizing the contributions of others, how they keep our lives going, contributes to our resilience and well-being, too.

A hundred times every day I remind myself that my inner and outer life depend on the labors of other men, living and dead, and that I must exert myself in order to give in the same measure as I have received and am still receiving.

I remember reading a story about a nursing professor whose last question on the semester’s final exam was “What are the names of the orderly and the janitor on your shift?”  Students couldn’t pass the class without knowing the names of the

I learned something similar last week about that importance of recognizing the people who keep our lives going as the people – and hard workers – they are.  A large screw punctured the left front tire of my car. It didn’t cause the tire to go flat, but it produced the sound of a steady flop-flop-flop as I drove that sounded like the tire would go flat any minute. So I drove to my neighborhood gas station where Peter (I did learn his name!) was able to fix the tire in 20 minutes for $30.  How many times have I driven past that gas station and never given the people who work there much thought until I needed their services?

It’s like that everywhere. Meeting the local farmer (Patty Jo) who grew the tomatoes I’ll use in my salad tonight. Learning the name of the medical assistant (Melinda) who ushered me into my eye exam last week. Saying thank you to the guy who picks up my garbage and recycling every Monday morning, learning his name (Alan) and saying thank you.

Exercise: Recognizing – and Honoring – the Labor of Others

It may be a stretch of our conscious awareness to think of the people who help keep our lives going, taking a moment to think of them as people who have their own lives besides their services that keep our lives going, taking another moment to identify one or two or three that we could take that one further moment to learn their name and to say thank you for the work they do that contributes to our well-being.

The firemen who came to my house when the new (defective) smoke alarm went off and I couldn’t open the case to stop it from going off. (Ron, Paul and Diego)

The customer service representative at my bank (Sheila) who spent 20 minutes tracing a fraudulent charge on my credit card ($6,253 for Federal Express?) so that it could be removed without having to cancel my credit card.

The postal worker (Dina) who braved a rainstorm to open up the corner mailbox after I accidentally dropped my house keys into the mailbox.

1. Make a list of people (their job if you don’t yet know their name) whose honest and generous labor contributes to your own well-being. Maybe people you see every day or every week; maybe someone whose path crossed yours only once.

2. Identify one person you will be able to talk with, ask their name, and thank them for the good work they do.

3.  Do that, this week. And notice a warm sense of well-being inside for having done that.

My grandfathers would have appreciated this acknowledgement of their efforts:

TO BE OF USE

The people I love the best

without dallying in the shallows

and swim off with sure strokes almost out of sight.

They seem to become natives of that element,

the black sleek heads of seals

I love people who harness themselves, an ox to a heavy cart,

who strain in the mud and the muck to move things forward,

who do what has to be done, again and again.

I want to be with people who submerge

in the task, who go into the fields to harvest

and work in a row and pass the bags along,

who are not parlor generals and field deserters

but move in a common rhythm

when the food must come in or the fire be put out.

The work of the world is common as mud.

Botched, it smears the hands, crumbles to dust.

But the thing worth doing well done

has a shape that satisfies, clean and evident.

Greek amphoras for wine or oil,

Hopi vases that held corn, are put in museums

but you know they were made to be used.

The pitcher cries for water to carry

and a person for work that is real.

– Marge Piercy, Circles on the Water