One Petunia, One Person, One Huge Redemptive Truth

One Petunia, One Person, One Huge Redemptive Truth 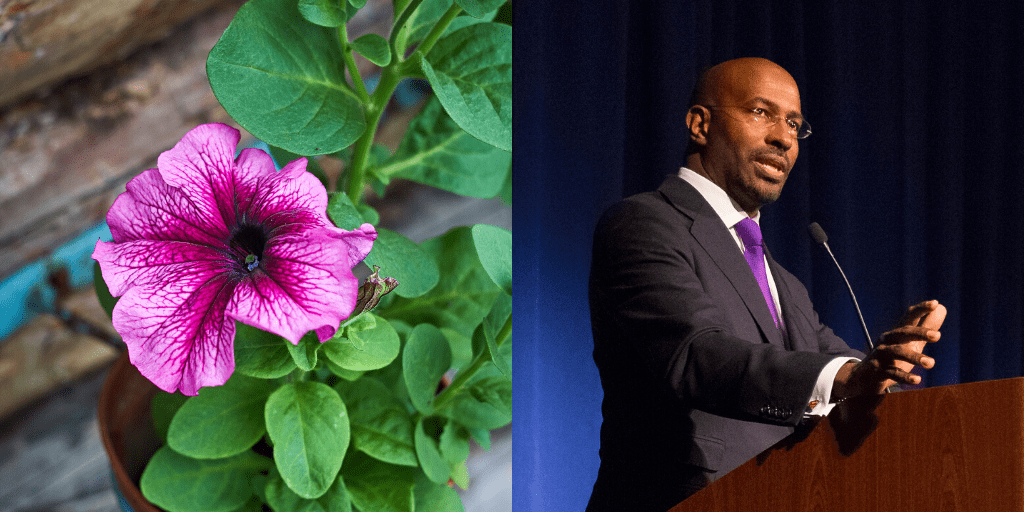 Some days, when I get overwhelmed, I focus on just one petunia blooming in my garden. Not the whole garden. One petunia, blooming its heart out, manifesting the miraculous life force of all the petunias in the world.

Some days, when I get overwhelmed, I focus on one person, just one person, speaking their truth from their heart, manifesting the miraculous truth force of all the compassionate hearts in the world.

This truth speaking is from Van Jones, the host of the Van Jones Show and the relentless commentator on truth and justice for CNN.  This excerpt is from an interview on a WinWisconsin 2020 webinar with Tara Brach and Jack Kornfield on June 11, 2020.

“If we had done this [interview] a week ago, I probably couldn’t have been part of it just because there was so much heartbreak. The world saw something that’s been happening in our country for centuries. Saw a black man lynched by a white man. That’s what that was, that video. And it broke us. It broke the black community, to watch something like that happen.

One minute…two minutes…three minutes…four minutes…five minutes… starts calling out for his mother…his mother’s been dead for years…six minutes…urinating on himself…begging for his life, fifteen times… “I can’t breathe…”the community screaming in horror…eight minutes…and 46 seconds…these videos have been part of American life for seven-eight years, there’s always “Oh, well, it was a quick decision, the cop’s got to defend himself…he was talking back…he was fighting back…what do you want, what do you expect…you can’t second guess the police…”

But this one…this one…filmed from beginning to end…stunned the world. And for all of the times we have been lynched, we’ve never had a situation where a billion people could see it all at the same time on their smart phones. And it shoved a piece of glass into the eyeball of everybody on the planet. And it hurt them.  People couldn’t sleep having seen it. They couldn’t rest.

And if we had tried to have this conversation a week ago, we probably couldn’t have had it.  But a miracle is taking place. A miracle is taking place. A continent of new common ground has emerged from beneath the waves, where there are 20, 30, 40 million white Americans saying “racism is real, more real than I thought. There’s something wrong with our justice system; it’s more broken than I knew. What can I do about it?”  As an African-American man, it’s a miracle. It’s all I’ve wanted. Just some acknowledgement. That what is happening is happening, and that we need to do something about it.”

The interview continues for another few minutes; you can watch the entirety of it here, courtesy of Tara Brach’s website’s Anti-Racism Resources. And you can learn what you can do from other offerings on Tara’s website as well.

Resourcing our resilience with one petunia, with one person’s truth, to sustain our own engagement with this changing and challenging world.