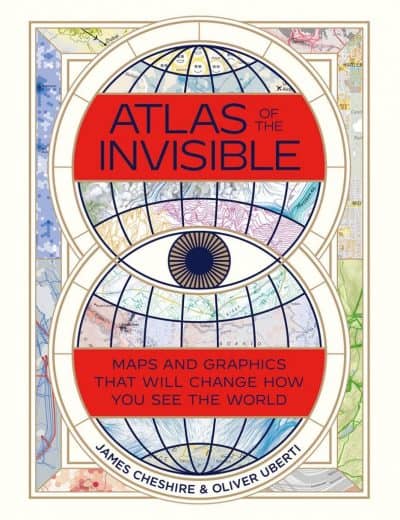 I had a five-hour flight to teach at the Psychotherapy Networker Symposium last week, enough time to read one entire book, start to finish. And to relish not only the time to focus on one project and only one project for that long, but to relish that my brain could still focus on anything for that long of a time. [See last week’s post Stolen Focus for insights into the many factors in our current culture that, in fact, make it harder to concentrate on anything at all for more than a few seconds.]

The book was Atlas of the Invisible: Maps and Graphics That Will Change How You See the World by cartographer James Cheshire and graphic designer Oliver Uberti. A rich treasure of colorful maps and graphics that captured big data, and interpreted the significance of that data, in easily comprehensible, easily delightful maps and graphics.

*  Smartwatches that track heart rate and speed of walkers inadvertently revealed the perimeter of a US Air Force base in Afghanistan.

*  Puerto Ricans fleeing the ravages of Hurricane Maria in 2017 inadvertently left traces of their paths to safety in the U.S, and eventual return to Puerto Rico, through the shifts in use of cell phone towers along the way.

*  The authors used data from the 2020 United Nations World Happiness Report portrayed through playful emojis to document “states of mind” in 150 countries: life satisfaction overall, positive emotions over three days, negative emotions over three days. And could correlate the data with income levels, political freedom, trustworthiness in societies, and safety net of friends and relatives.

*  Their maps easily portray which countries are the easiest to travel to and are the most welcoming vis-à-vis passport requirements, and which are harder/less welcoming.

The authors have a high degree of progressive, political correctness and illustrate how big data can be used for humanitarian and social service causes.

*  Researchers from M.I.T used data about high levels of commerce and human flow in Africa’s network of roads in 2014 to predict the spread of Ebola as people re-connected with families.

*  When Flint, Michigan began using untreated water from the Flint River for the city’s water supply in 2014, and acidified water from decades of industrial use began corroding the city’s aging lead pipes, computer scientists from the University of Michigan used data from city housing records to predict which of hundreds of homes were most likely to have lead pipes that needed immediate replacement.

*  The authors used data from the Organisation for Economic Co-operation and Development, about daily paid and unpaid labor for men and women in 30 countries, to show graphically which countries had the most equitable, balanced workloads (Sweden ranking the highest) and which had the most imbalanced, inequitable workloads. (India ranked the lowest, with women performing 6 times more unpaid labor than men.)

*  The authors used data from The Armed Conflict Location and Event Data project to make visible the world’s areas of the most gender-based violence, from sexual violence and shootings to mob violence and the “disappearance” of human rights petitioners.

*  Many maps illustrated the growing impacts of climate change:

The areas of the world with the most polluted air

The changes in sea surface temperatures and increased cyclone activity

A map of daily contrails (carbon overhead); one of the worst – the daily traffic between London and Amsterdam

The authors trace the history of cartography and the evolution of computerized use of big data. One of the most poignant examples for me was the integration of places on a map with interviews of Holocaust survivors about what their lives were like in those places on the map, in those concentration camps. The map, adapted from I Was There, Places of Experience in the Holocaust, illustrates movements on the map integrated with the testimony from interviews with those particular survivors. A focus on real people and their real experiences, day by day until liberation.

I visited the US Holocaust Memorial Museum in Washington, D.C. the day after I finished reading Atlas of the Invisible. What a synchronicity, to listen to even more interviews of Holocaust survivors with a deeper sense of what their lived experiences were like.

Atlas of the Invisible changed my perspective on so many things. I encourage you to let it change yours as well.