The Cats Are Up in the Chimney Again

The Cats Are Up in the Chimney Again 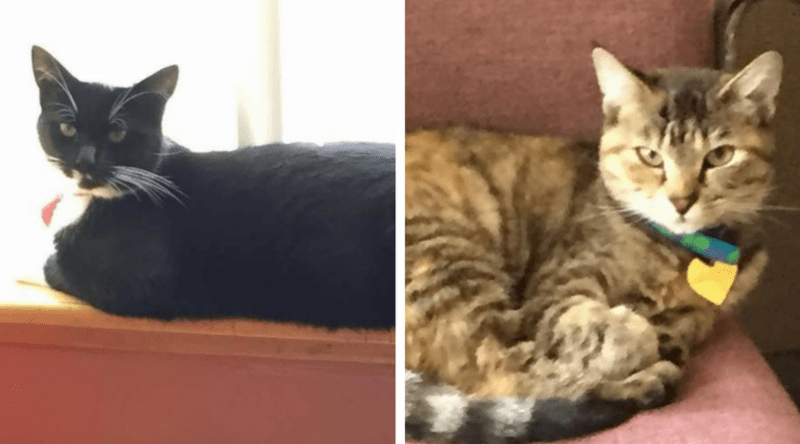 I adopted two new adorable cats from the Humane Society two weeks ago – cuddly, sweet, adjusting well. Except, inexplicably, they could disappear for hours, hiding somewhere in the house, and I could not ever find them. Until one morning I saw one of them come down the chimney back into the living room. In almost 20 years of sharing my home with cats, I had never seen that, heard of that, thought of that – resting on a ledge in the flue, their ear tips barely sticking up over the ledge.

After coaxing them back out with smoked salmon, it took me about 30 minutes to move paintings and pillows and the piano bench around enough to satisfactorily block the open fireplace until I could get a screen later that day that would do the trick more satisfactorily, more aesthetically. Then I spent 30 minutes watching them, resilient creatures that cats are, looking for any possible way they could get back up the chimney.

So the quotes below are my ode to the adorableness, and rambunctiousness, of our cat companions.

And just before the quotes, this link to the most amazing YouTube video of a mother cat adopting three newly hatched ducklings – also totally adorable.

A cat determined not to be found can fold itself up like a pocket handkerchief if it wants to.
– Louise J. Camuti

Your cat will never threaten your popularity by barking at three in the morning. He won’t attack the mailman or eat the drapes, although he may climb the drapes to see how the room looks from the ceiling.
– Helen Powers

In order to keep a true perspective of one’s importance, everyone should have a dog that will worship him and a cat that will ignore him.
– Dereke Bruce

Dogs come when they’re called; cats take a message and get back to you later.
– Mary Bly

A dog, I have always said, is prose; a cat is a poem.
– Jean Burden

The cat could very well be man’s best friend but would never stoop to admitting it.
– Doug Larson

In ancient times cats were worshipped as god; they have not forgotten this.
– Terry Pratchett

A cat isn’t fussy – just so long as you remember he likes his milk in the shallow, rose-patterned saucer and his fish on the blue plate. From which he will take it, and eat it off the floor.
– Arthur Bridges

A cat is the only domestic animal I know who toilet trains itself and does a damned impressive job of it.
– Joseph Epstein

If I called her she would pretend not to hear, but would come a few moments later when it could appear that she had thought of doing so first.
– Arthur Weigall

He liked companionship, but he wouldn’t be petted, or fussed over, or sit in anyone’s lap a moment; he always extricated himself from such familiarity with dignity and with no show of temper. If there was any petting to be done, however, he chose to do it. Often he would sit looking at me, and then, moved by a delicate affection, come and pull at my coat and sleeve until he could touch my face with his nose, and then go away contented.
– Charles Dudley Warner

When I play with my cat, who knows if I am not a pastime to her more than she is to me?
– Michel de Montaigne

Of all the toys available, none is better designed that the owner himself. A large multi-purpose plaything, its parts can be made to move in almost any directions. It comes completely assembled, and it makes a sound when you jump on it.
– Stephen Baker

Cats have intercepted my footsteps at the ankle for so long that my gait both at home and on tour, has been compared to that of a man wading through low surf.
– Roy Blount, Jr.

Although all cat games have their rules and rituals, these vary with the individual player. The cat, of course, never break a rule. If it does not follow precedent, that simply means it has created a new rule and it is up to you to learn it quickly if you want the game to continue.
– Sidney Denham

Another cat? Perhaps. For love there is also a season; its seeds must be re-sown. But a family cat is not replaceable like a worn out coat or a set of tires. Each new kitten becomes its own cat, and none is repeated. I am four cats old, measuring out my life in friends that have succeeded but not replaced one another.
– Irving Townsend

Cats come and go without ever leaving.
– Martha Curtis

No amount of time can erase the memory of a good cat, and no amount of masking tape can ever totally remove his fur from your couch.
– Leo Dworken

The cat is the only animal with accepts the comforts but rejects the bondage of domesticity.
– Georges Louis Leclerc de Buffon

The cat in the only animal without visible means of support who still manages to find a living in the city.
– Carl van Vechten

The city of cats and the city of men exist inside the other, but they are not the same city.
– Italo Calvino

Way down deep, we’re all motivated by the same urges. Cats have the courage to live by them.
– Jim Davis

Prowling his own quiet backyard or asleep by the fire, he is still only a whisker away from the wilds.
– Jean Burden

A cat is a tiger that is fed by hand.
– proverb

A cat is a lion in a jungle of small bushes.
– Indian proverb

God made the cat in order that man might have the pleasure of caressing the lion.
– Fernand Mery

I believe cats to be spirits come to earth. A cat, I am sure, could walk on a cloud without coming through.
– Jules Verne

I love cats because I love my home and after a while they become its visible soul.
– Jean Cocteau

My cat speaks sign language with her tail.
– Robert A. Stern

A kitten is the most irresistible comedian in the world. Its wide-open eyes gleam with wonder and mirth. It darts madly at nothing at all, and then, as though suddenly checked in the pursuit, prances sideways on its hind legs with ridiculous agility and zeal.
– Agnes Repplier

Like a graceful vase, a cat, even when motionless, seems to flow.
– George F. Will

A cat pours his body on the floor like water.
– William Lyon Phelps

You cannot look at a sleeping cat and feel tense.
– Jane Pauley

I put down my book The Meaning of Zen, and see the cat smiling into her fur as she delicately combs it with her rough pink tongue. “Cat, I would lend you thin book to study but is appears you have already read it.” She looks up and gives me her full gaze. “Don’t be ridiculous,” she purrs, “I wrote it.”
– Dilys Laing

Authors like cats because they are such quiet lovable, wise creatures, and cats like author for the same reasons.
– Robertson Davies

I wish I could write as mysterious as a cat.
– Edgar Allen Poe

Cats are dangerous companions for writers because cat watching is a near-perfect method of writing avoidance.
– Dan Greenburg

If by chance I seated myself to write, she very slyly, very tenderly, seeking protection and caresses, would softly take her place on my knee and follow the comings and goings of my pen – sometimes effacing, with an unintentional stroke of her paw, lines of who tenor she disapproved.
– Pierre Loti

A catless writer is almost inconceivable; even Ernest Hemingway, manly follower of the hunting trophy and the bullfight, live waist-deep in cats. It’s a perverse taste, really, since it would be easier to write with a herd of buffalo in the room than even one cat; they makes nests in the notes and bite the end of the pen and walk on the typewriter keys.
– Barbara Holland

To err is human, to purr is feline.
– Robert Byrne

If we treated everyone with the same affection we bestow upon our favorite cat, they, too, would purr.
– Martin Buxbaum

Are we really sure the purring is coming from the kitty and not from our very own hearts?
– Terri Guillemets

If purring could be encapsulated, it would be the most powerful anti-depressant on the market.
– Terri Guillemets