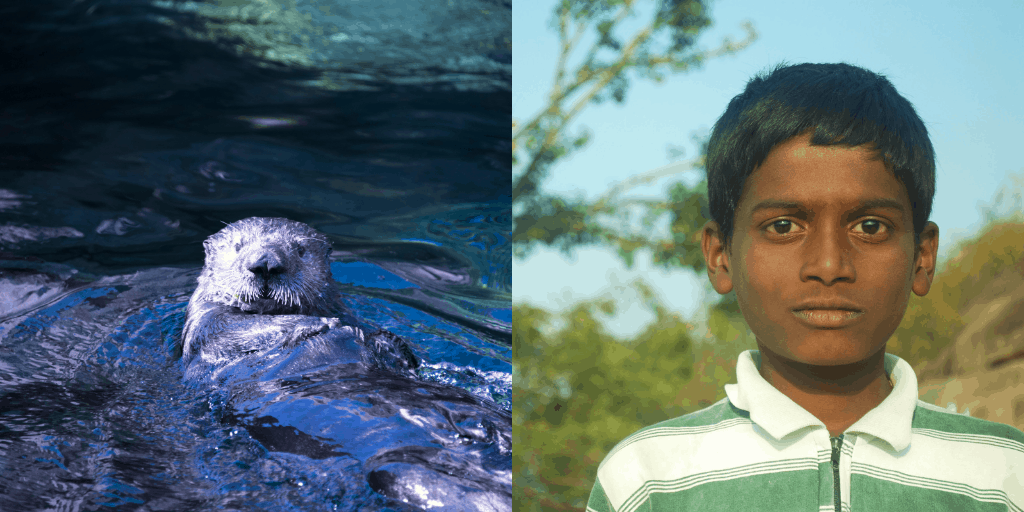 While visiting the Monterey Bay Aquarium last week, I watched a film about the rescue of Luna, an otter pup orphaned by a storm when she was just four days old. The aquarium staff brought her to the aquarium to be fed and cared for, found a surrogate otter “mom” who taught her how to crack open mussels and twist in the water to watch out for predators, and eventually released her back into the wild at Elkhorn Slough.  Adorable pup and dedicated staff; truly heartwarming and inspiring.

That night, back home, I watched the documentary The Lost Boys of Sudan about two of the 3,800 Sudanese refugees brought to the U.S. in 2001-2002, of the 70,000 young men orphaned in the 20 year old civil war in Sudan. Heroic efforts on the part of many dedicated people and agencies to provide food, shelter, jobs, education in the hopes of the young men either returning to Sudan to help re-build their country or find new lives/new hope in America.

Both films touching, inspiring. And leaving me with far more questions – about marine mammal protection, ocean conservation, climate change, about the role of humanitarian aid in times and places of ancient hostilities and genocide – than I knew what to do with.

Sharing my dismay at the magnitude of the problems facing individual pups and individual people, let alone all of humanity and all of the planet, my colleague Stacey wisely advised, “Change doesn’t come from having the answers. Change comes from having the right questions.”

That reminded me of the wisdom of the American psychiatrist M. Scott Peck that I shared in the recent post Six Reliable Ways to Deal with Any Disaster:

The truth is that our finest moments are most likely to occur when we are feeling deeply uncomfortable, unhappy, or unfulfilled.  For it is only in such moments, propelled by our discomfort, that we are likely to step out of our ruts and start searching for different ways or truer answers. – M. Scott Peck, M.D.

And of the plaque over the entrance to the electrical engineering lab at SRI International:

We have not solved your problem.

In fact, we have more questions than when we started.

But we believe we are confused at a higher level

And about more important things.

The 44th Mill Valley Film Festival begins today. 76 films from mostly independent filmmakers from 35 countries around the world, 50% written and/or directed by women, looking for the right questions, including The New Environmentalists profiling six passionate grassroots activists from Myanmar, France, Mexico, Ghana, the Bahamas, and Ecuador, all winners of the Goldman Environmental Prize, all fighting for environmental justice in their communities.

And I pass on to you the link to one of the most brilliant explorations of the right questions I have ever encountered: “9/11: A Turning Point.” Not the film recently released by Netflix but to a panel discussion sponsored by Cal Performances at U.C. Berkeley, bringing together the producer of the film, and the Muslim cinematographer of the film, and a journalist, a Marine intelligence officer, the coordinator of U.S. aid, all veterans of the 20-year war against the Taliban, asking the right questions about what happened, what we did right, what we did wrong, and what do we do now.

Cal Performances has chosen the theme for its 2021-2022 season on concerts and lectures “Place and Displacement.”  Exploring the imponderable questions facing refugees, immigrants and people displaced by poverty or gentrification. The discussion linked above is part of that exploration, riveting and enlightening. Available free to the public through December 29, 2021.

Take All the Time You Need

Abiding in Being: Foundational to Resilience

The Original Map of Resilience